Words are powerful, and the way we use them can have a tremendous impact on the people who hear us speaking.

But it is not only negative words that can harm us. Sometimes even the use of positive words can have a totally unexpected effect on people.

Claudia M. Mueller and Carol S. Dweck of Columbia University did a series of experiments1 that measured how the type of feedback children receive affects their behavior and motivation. Across six studies, they gave three sets of tasks to children (fifth graders):

After the first set, children were praised in one of the following three ways:

Additionally, after the first set of problems, kids were given a choice to select some tasks to work on after the experiment. Unbeknownst to them, those tasks embodied different goals: 3 types of tasks represented variations of performance goals (by doing them, kids could showcase their abilities), and one job represented a learning goal (by doing which kids would learn something rather than display how smart they are).

After the second set of problems, all kids were informed they have performed “a lot worse.” They were asked then to rate their desire to persist on the tasks, their enjoyment of the problems, the quality of their performance, and why they think they have failed. 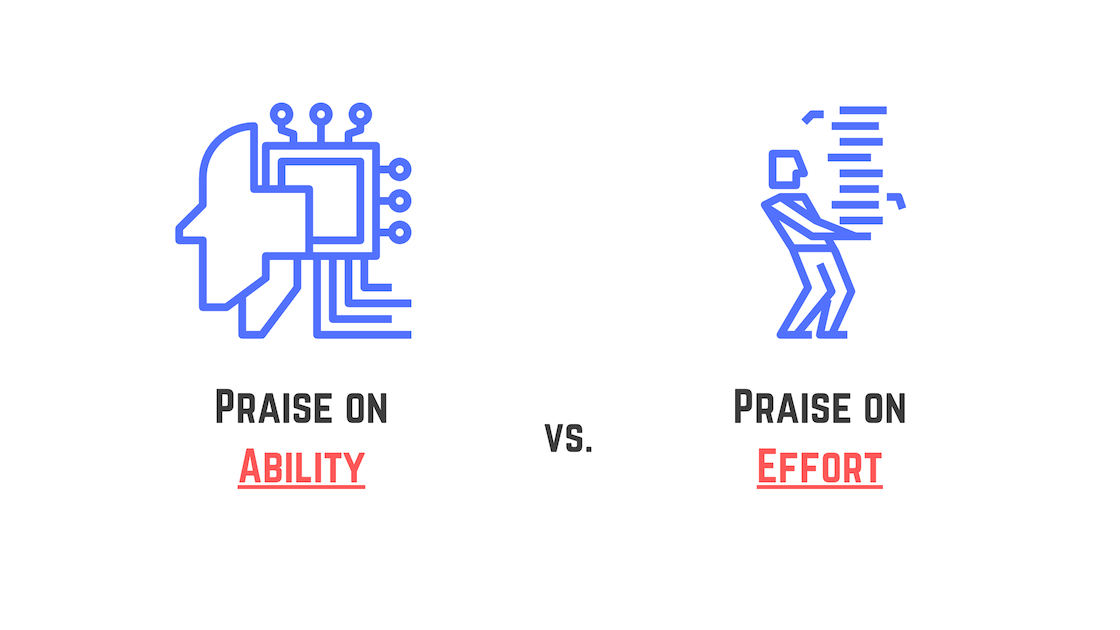 What scientists found out is incredible. The gist of experiments is that children praised for intelligence had lower levels of persistence, enjoyment, and performance on the more difficult tasks. They viewed their failure as something out of their control (“I’m just not smart enough”). Conversely, children praised for effort showed higher engagement levels and persisted more when they encountered harder tasks. More importantly, they viewed their failure as something they have control over (“I didn’t work hard enough”), and they did not appear to consider intelligence to be determined from any single performance like their ability praise counterparts did. And children in the control group were in the middle—their response was worse than those praised for effort but better than those praised for intelligence.

Among other interesting findings are:

What Does It Mean

The implications of this are tremendous. It means children who are praised for ability have lower motivation and are not inclined to continue to learn more since, for them, intelligence is something you either have or not. Moreover, the tasks they choose usually aim at showcasing their existing talents, rather than attempting to learn something new.

Considering how ubiquitous praising for ability is in the modern world, it might explain to some degree why so many people refuse to learn continuously and only seek to validate their skill set by choosing tasks they cannot get wrong, and that make them look good.

It also shows that alongside the importance of the education system, everyday communication within the family is critical as well. The family and friends have maybe even a more considerable significance. If scientists managed to get that kind of behavior from children after offering feedback two times only, imagine how potent is the (sometimes misleading) self-perception of those kids after reinforcing their smartness over decades by parents who (sometimes unmeritedly) are saying their kids are the best.

Finally, it is not only about the younger generation. Adults were all children in the past and went through the same thing. The only difference is that while you still can do something about how kids get treated and how they perceive themselves, it is extremely hard (and in some cases impossible) to make a grown-up review their self-perception.