Debunking The Myth Of 10% Brain Usage

The human brain is a marvel of biological engineering. It allowed us to accumulate and pass on the knowledge of many prior generations throughout millennia, resulting in a civilization that went into space, taught computers to see and speak, and that continually discovers and investigates the laws of the Universe.

Its complexity is astounding, and we do not fully understand it yet. And because of that, occasionally, myths about the functioning of the brain pop out. Among the most prominent such legends is the one that claims we are dormant geniuses. But before analyzing and debunking that, let’s discuss some brain facts.

Size Does Not Matter

For instance, did you know that the brain weighs around 1300-1400 grams? It represents only 2% of the total body weight of a 150 pound or 70kg human. However, it requires: 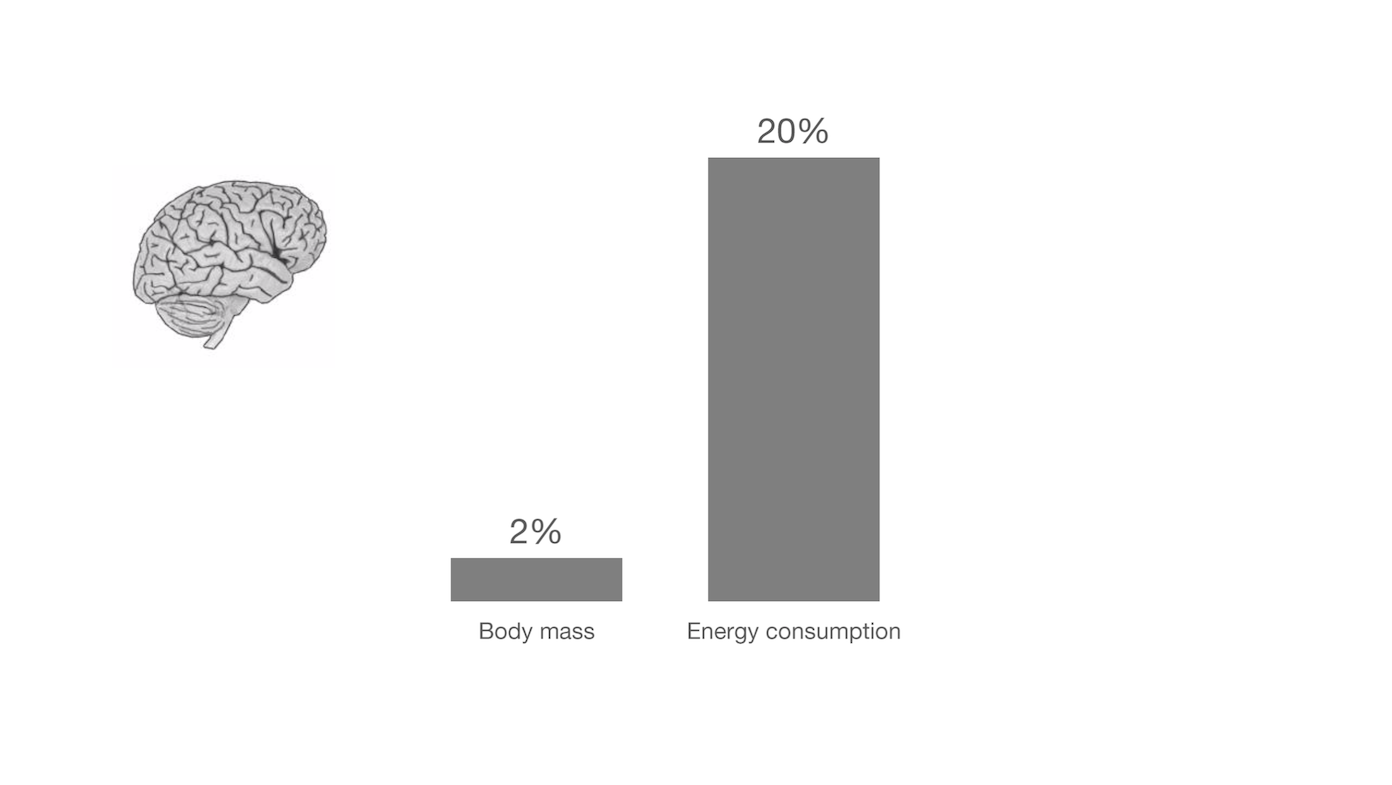 That is quite an energy-hungry organ inside our skull! But even that fades away when comparing to children: at around five years old, the human brain takes up as much as 50% of oxygen consumption1.

Surprisingly, the brain’s level of oxygen consumption does not significantly vary when you are resting vs. when you do some cognitively intense work. Overall, measures of the whole brain changes in blood flow during intense mental activity have failed to demonstrate any change. Even local changes in blood flow of the regions involved most in a cognitive task are often 5% or less.2

Conversely, it is well known and demonstrated that glucose is the brain’s “fuel,” therefore increases in blood glucose levels can positively impact cognitive performance in some tasks.3

There is a popular myth that we use our brains at only 10% of its capacity, thus boldly affirming that we have a whopping 90% of dormant potential that we can awaken and become geniuses.

Unlike other widespread myths that started from a single event, or unscientific claims from poorly designed research studies (e.g., Andrew Wakefield and his fraudulent study than falsely claimed a link between vaccines and autism), the myth that humans use only 10% of their brains started at the end of the nineteenth century and was gradually strengthened by many people since then. The Wikipedia article on the subject has a lengthy explanation of the potential origin and evolution of the myth throughout the years.

Before moving on, I have a revelation to make. Occasionally, I might buy a cloth item and wear it once or twice. If I recall correctly, there might have been one or two items in my experience that I have not worn at all. Do you know anyone with similar oddities?

This makes my wardrobe much like the brain described in the myth: I am using around 10% of it, and I can “tap into” the rest of my wardrobe should such need arise.

Your Brain Is Not A Wardrobe

But our brain is not a collection of cloth items. Though there are still unanswered questions regarding some brain functions, brain mapping physiology demonstrates that all its areas have a purpose. And you do not have to be a neuroscientist to prove that, simply recall from your anatomy classes that the brain has different regions, such as the frontal lobe, occipital lobe, cerebellum, and the fact that each of those lobes has its role.

Let’s address that myth in a more scientific manner.

If we are using only 10% of our brains, that means a person would be fine if the other 90% of the brain got removed. 10% of the 1400g average brain is 140g—that’s the size of a sheep’s brain.4 Since I doubt sheep have their own 90% hidden potential myth, it makes no sense that humans have advanced so far as a civilization by using only part of their brains equivalent in size to a sheep’s brain.

There are instances in history when people were injured and got parts of their brain removed (although not as close as even 10%), the most prominent (and among the first recorded ones) being the case of Phineas Gage, who survived an accident where a large iron rod was driven through his left part of the head, from the bottom of the cheek, through his left eye and frontal lobe all the way to the top of his head. He lived 12 years more after that accident. There are varying opinions on his recovery, but it took him ~10 years to recover from the unfortunate event.

Another example is the case of Lev Zasetsky. A bullet entered his left parieto-occipital area and resulted in a long coma. Following this, he became unable to perceive the right side of things. Objects he did see often appeared as fragmented pieces rather than whole objects. He did not recover in the 50 years he lived after the injury.

As mentioned in How People Learn—The Brain Basics, our brains can rewire through a process called neuroplasticity, which can help regain some of the lost functions as a result of an accident. Unfortunately, that is not always the case. Researchers have found that only 27% of people recover from a concussion.5 That means almost 3 out of 4 people do not fully recover! And this is “just” a concussion—your brain does not lose any of its parts.

If 90% of the brain were unnecessary, it is highly unlikely that we would not have evolved such big brains with irrelevant matter in the first place. There are several factors for that:

All this scientific evidence works against this myth. We indeed use only some areas of the brain at any given time, but throughout the day, we use all of it, not just 10%. And next time you hear about this myth, recall the sheep brain weight.