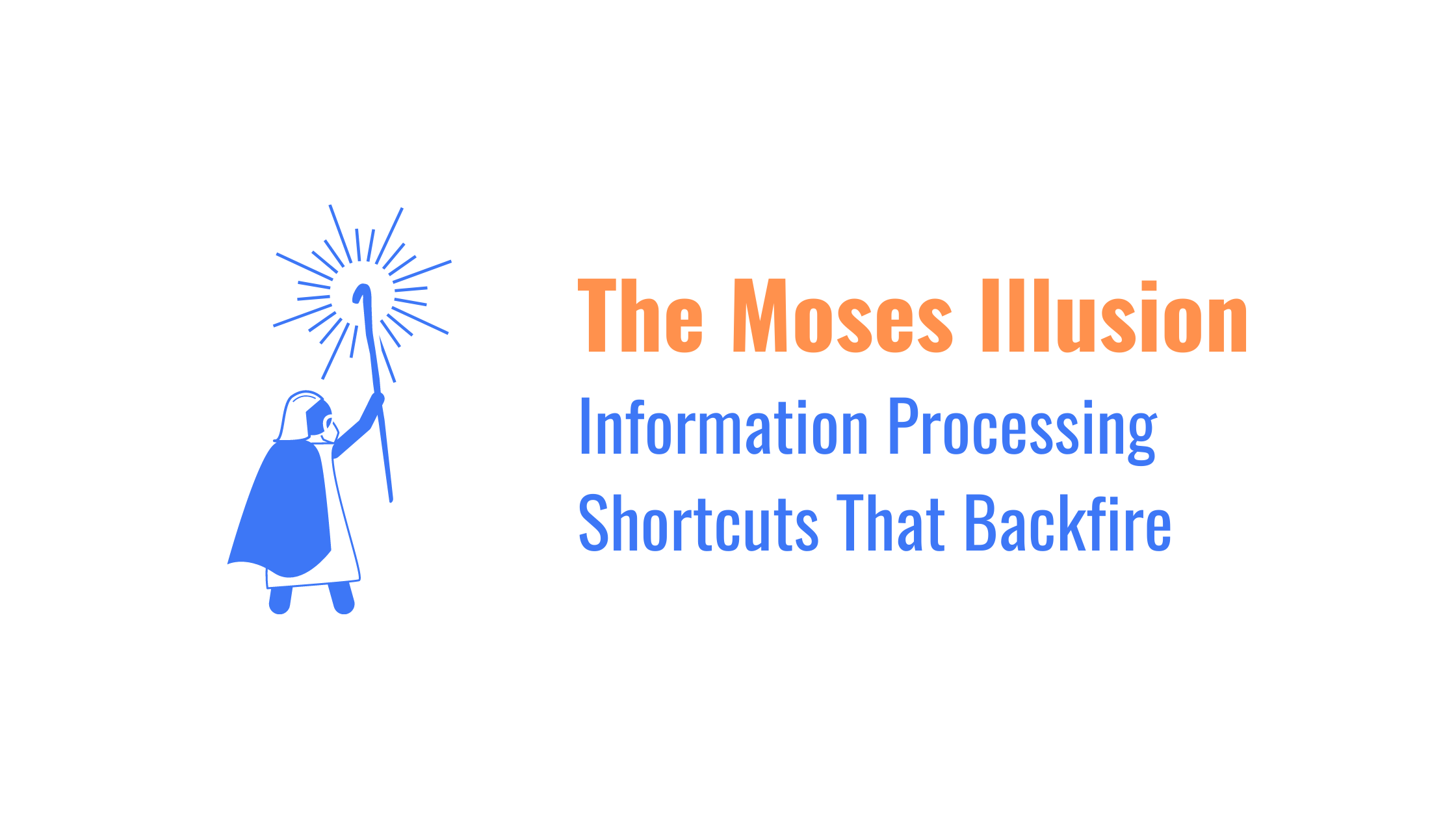 How many animals of each kind did Moses take on the Ark?

If you answered “2 of each kind,” you are not alone, even though the answer is wrong, as it was Noah who did bring animals onto the ark.

This behavior to adjust the sentence’s meaning to make sense is called the Moses Illusion (or semantic illusion) and were first studied in 19811.

The central hypothesis that explains why it happens is the fact that we usually make shallow processing and analysis of what we are reading (or hearing). We rely on the semantic meaning of parts of the question that make a sentence and build our general understanding of its intent based on its constituent parts' compatibility and interconnection. When a satisfactory coherence is achieved, we do not proceed to an in-depth analysis.

Thus, we know animals were on an ark, and a person was in charge of it. And since Moses is very similar to Noah (see next paragraph), we didn’t spot any discrepancy in the sentence’s wording.

What Erickson found is that not every name can be switched for Noah, though. The substitute name must have semantic similarity (similar in meaning) with the original one. Both Noah and Moses are older, bearded males in the Old Testament who received word from God and led their followers. That is why some people do not even spot the error.

Conversely, switching Noah with Ted does not work, since they aren’t similar in meaning. Erickson showed that even names that sound alike (e.g., Nixon) do not exhibit the Moses Illusion.

But it is not only with names. Here’s another question:

When an airplane crashes, where should the survivors be buried?

As Stephen B. Barton and Anthony J. Sanford showed in their paper,2 around 40% of 150 subjects who participated in the experiment did not spot the fact that a survivor is a person who did not die in an airplane crash.

Here some people establish a satisfactory coherence of the sentence after processing “plane crash” and “buried.” They stop any further processing and conclude that it is about the people who died, even though it clearly states it is about survivors.

Can a man marry his widow’s sister?

This is another example that shortcuts some people’s processing. The answer is “no,” since if you are dead, you cannot marry anyone.

Overcoming The Effects Of Semantic Illusions

Language is inherently ambiguous. And semantic illusions are just a natural consequence of some language usage patterns.

Although you cannot become fully illusion-proof, the things you can do to alleviate its effect on you is to stay focused. Do not rush, as it will only increase the chances of superficial processing. Also, keep distractions at a minimum, as our working memory capacity is very limited. By overloading it with unnecessary information, you take away resources from an already tricky task (reading and making sense of words that may be ambiguous). Therefore, keep focused and take your time.