Regardless of how much of this article you will read, may you have an exciting day ahead!

But if you want to know why I put the above intro, read on. 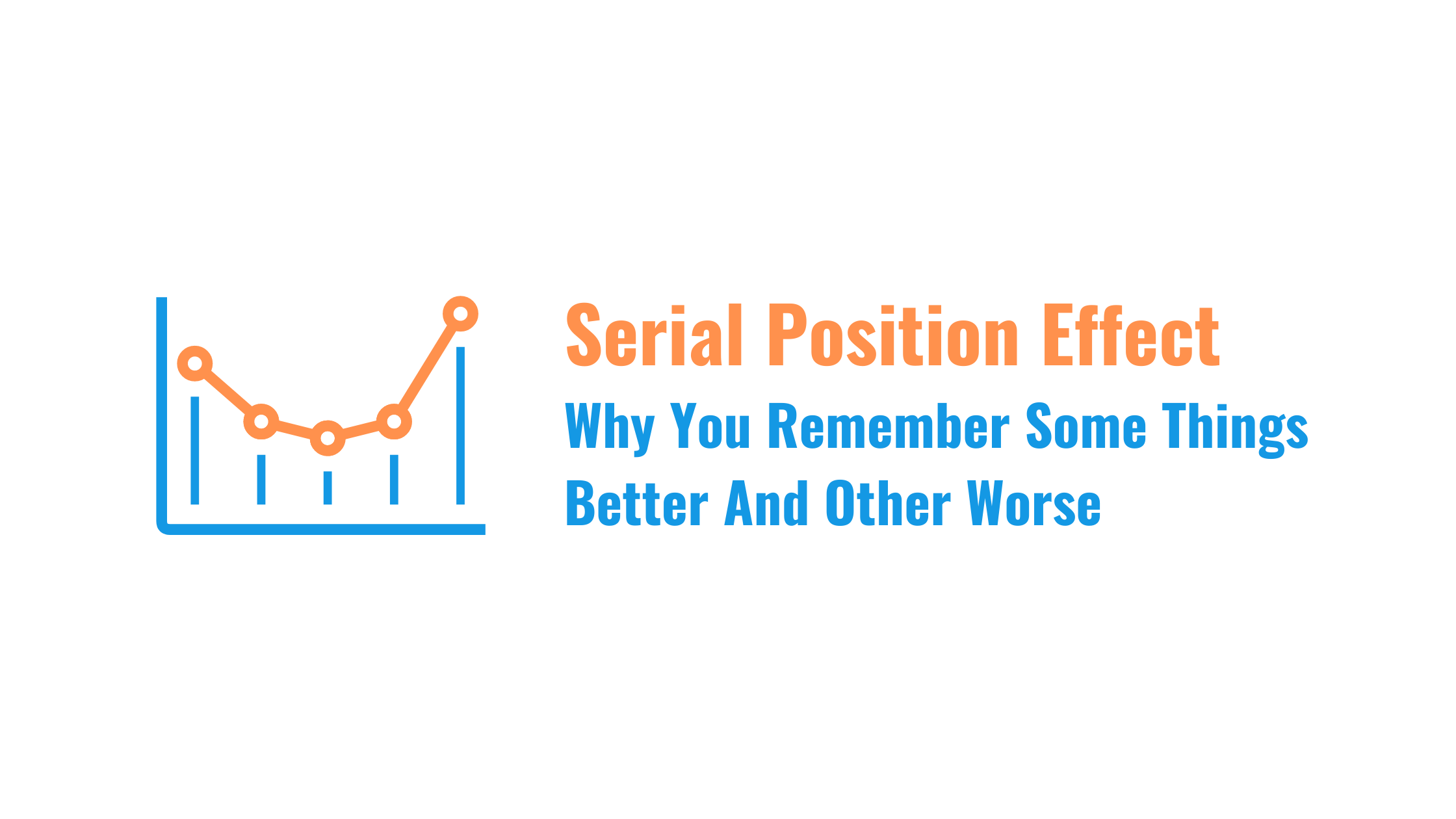 Imagine you have to go to the grocery store and write a list of items you need to buy (the list is completely made up; any similarity with real grocery lists are a coincidence):

But once you arrived at the store, you realize you forgot the list at home.

While you might struggle to remember the entire list, you have a higher chance to recall the first and last item(s). In psychology, it is called the serial-position effect.

The serial-position effect is the tendency of a person to recall the first and last items in a series best, and the middle items worst1.

The term was first coined in 1885 by Herman Ebbinghaus, a German psychologist who studied learning and forgetting processes. In the twentieth century, many other psychologists studied it in more depth.

The experiments usually consist of remembering a list of words and recall it later. For instance, in Murdock’s experiment,2 six groups of people had different combinations of list length and presentation rate (between 10–40 words and 1–2 seconds).

A common theme in different experiment results was that the first and last elements were more likely to be recalled, while the words in the middle of the list were least likely to be remembered.

The primacy effect is a cognitive bias that results in a person recalling information they were presented earlier better than information presented later. For instance, a person who reads a long list of words is more likely to remember words at the beginning than those from the middle of the list.

Scientists still do not know what exactly causes the primacy effect. The main hypothesis is that the elements that are presented first are rehearsed more in the process of remembering and therefore form more robust neural circuits that persist longer, as the primary showed information is committed to the long-term memory.

Moreover, the potency of the primacy effect increases significantly in case you learn a concept that is new to you. Our memory is associative and interconnected, and whenever we learn something, we expand on existing knowledge. But when we learn a new concept that is hard to associate to some existing knowledge, as mentioned in the brain basics, we create new neural circuits. These circuits then serve as a backbone for all subsequent associated information since everything we learn related to that concept will be tied to the initial neural patterns. Therefore, the information we learn first greatly impacts all our subsequent learning and perception of related data.

One last thing to note is that the impact of primary information is not permanent. However, it takes a great deal of effort to “overwrite” the initial impression you have on something.

Conversely, the recency effect is responsible for our ability to recall better the information that was presented last.

Unlike the primacy effect, it is believed that the recency effect is due to information residing in short-term memory rather than the long-term store. Glanzer and Cunitz, in their 1966 paper,3 ran an experiment that supports the short-term memory theory. After presenting a list of words, they asked the subjects to count backward in threes, which prevented rehearsal and caused the recency effect to disappear.

You can see that as the delay increases, the recency effect disappears, but the primacy effect remains.

The applicability of this principle has a broad range, from interpersonal interaction with people to all kinds of information processing and communication. Let’s see some examples.

What you say first does count. In an experiment performed by Norman H. Anderson and Alfred A. Barrios,2 subjects had to form an impression about different people based on sets of adjectives (6 words per set). The groups consisted of “favorable” and “unfavorable” adjectives.

Even though some sets consisted of the same words, subjects gave a more positive impression when the group started with favorable terms, which shows a primacy effect in personality impression formation.

It is quite hard to set up the context for studying to learn important/critical information first as you don’t know what you are learning in the first place. What you can do is assure you at least learn from reliable sources.

A recent and demonstrative example is COVID-19. When irresponsible media, politicians, and other people with a significant fan base spread misinformation, that results in devastating consequences, as we all have witnessed in recent months. It is important to note that the primacy effect is not the leading cause of such an outcome, but it has its share in what has happened.

Therefore, to benefit from the primacy effect, establish a strong foundation by learning from reliable sources.

Let’s see now how the recency effect manifests itself in our day-to-day lives.

Whenever you have to part ways with somebody, leaving on a positive note always works best and carries a positive impression. A simple “it was great seeing you” has almost a magical effect on people.

Similarly, when you discuss with someone or give a presentation, it is important how you finalize your communication, since the way you do that has the potential to impact the perception of the entire interaction with you. Finishing on a positive note will slightly shift the whole interaction’s perception to a more positive side.

It is somewhat hard to leverage the primacy effect when learning something, but it is straightforward (and useful!) to take advantage of the recency effect. Whenever you learn something, make sure you summarize the key points at the end of your learning session. By doing this, you set up the relevant information to benefit from the recency effect, as it will stay in short-term memory for longer and have more chances to be repeatedly processed and committed to the long-term store.

These are some obvious ways in which the primacy and recency effects manifest themselves in our lives. But there are many more, some of which are very subtle, that can impact our behavior and choices.

For instance, Jones, Love, and Maddox, in a 2006 paper,4 defined a decisional recency effect. They showed that recent information is weighted more heavily, which produces a tendency to choose responses or actions that have recently been reinforced.

Another example is when you go to a restaurant, you might be more inclined to order the same dish you ordered last time (if you liked it) because that is the last choice that was reinforced in your previous visit.

Also, I know you are a great person :) and if you read this article, you are interested in becoming a better version of yourself. Make sure you subscribe below and follow me on twitter (@iuliangulea) for updates and some random thoughts.