In Search Of An Equilibrium In The Infinity Of Possible Perspectives 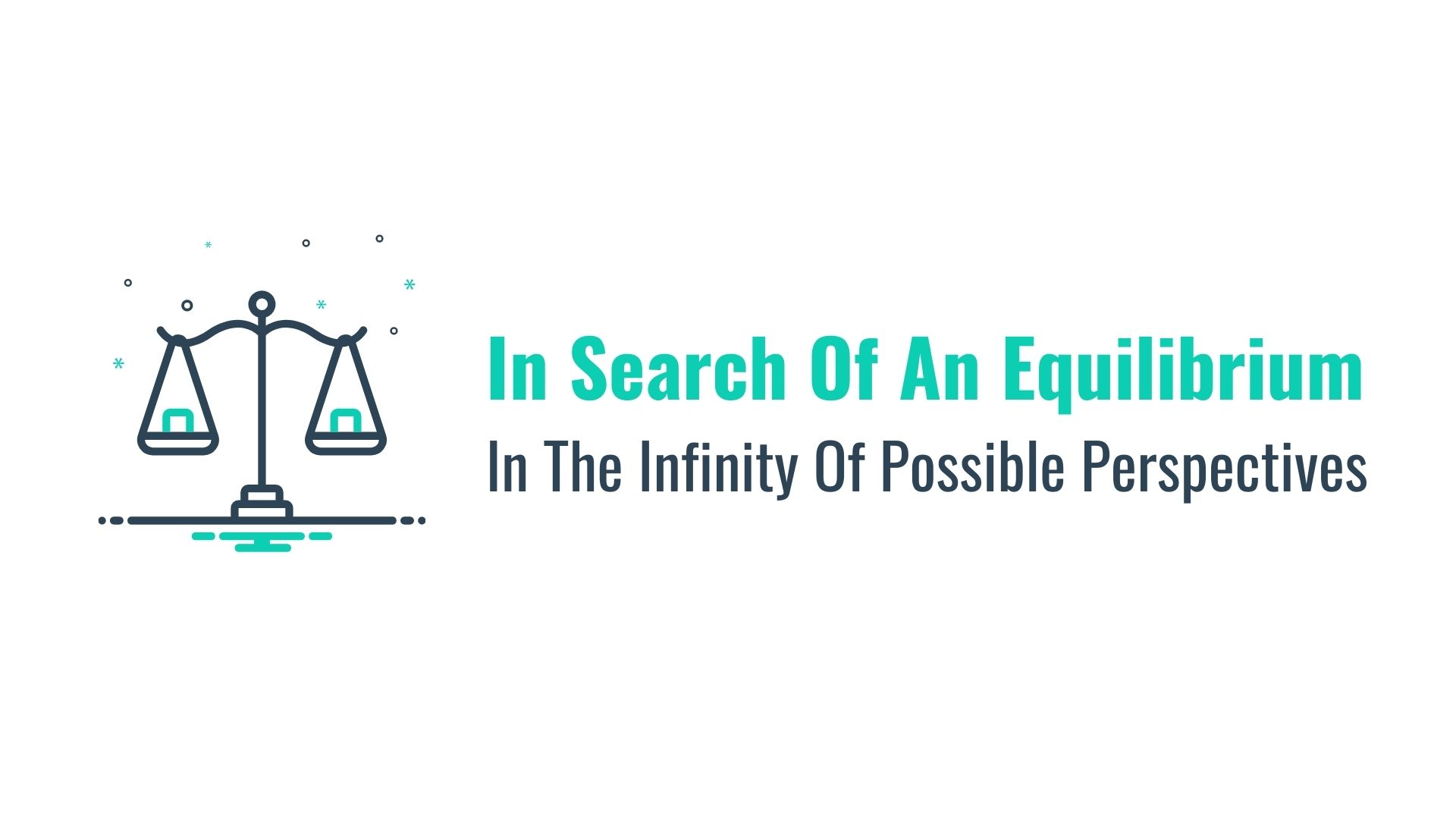 Sometimes it looks like the world is going crazy. All the unimaginable events happening in different parts of the globe trigger various movements: some positive, some negative, some adequately useful, and some extreme.

Try to recall the most recent event that you know when a person went into an extreme, and I bet that wasn’t more than two weeks ago.

Generally speaking — making the right choices and decisions is hard, especially when the concepts you reason about are abstract. This article is an attempt to jot down some guiding principles when debating on such subjects.

The Black And White Aspects Of Our Lives

Some things in life have clear boundaries and choices:

But the moment you switch from simple decisions to more complex and abstract concepts, you also switch from a finite set of options to an infinite spectrum of possible viewpoints.

The Blackish White That Is Lighter Than Dark Grey

For instance, when talking about perceptions, it is extremely hard to be precise in how you feel. That’s because there is no predefined scale from 1 to N that would describe what you should sense at 1, 2, 3, etc. That is, it is next to impossible to quantify your feelings in great detail (although we do have elementary scales in some questionnaires like 1–5, 1–10, or -5–5 that try to map an infinite amount of perceptions onto 5 or 10 categories). The situation is similar when talking about complex notions.

And as though it wasn’t enough, the condition worsens when we begin to argue with someone on any such topic. 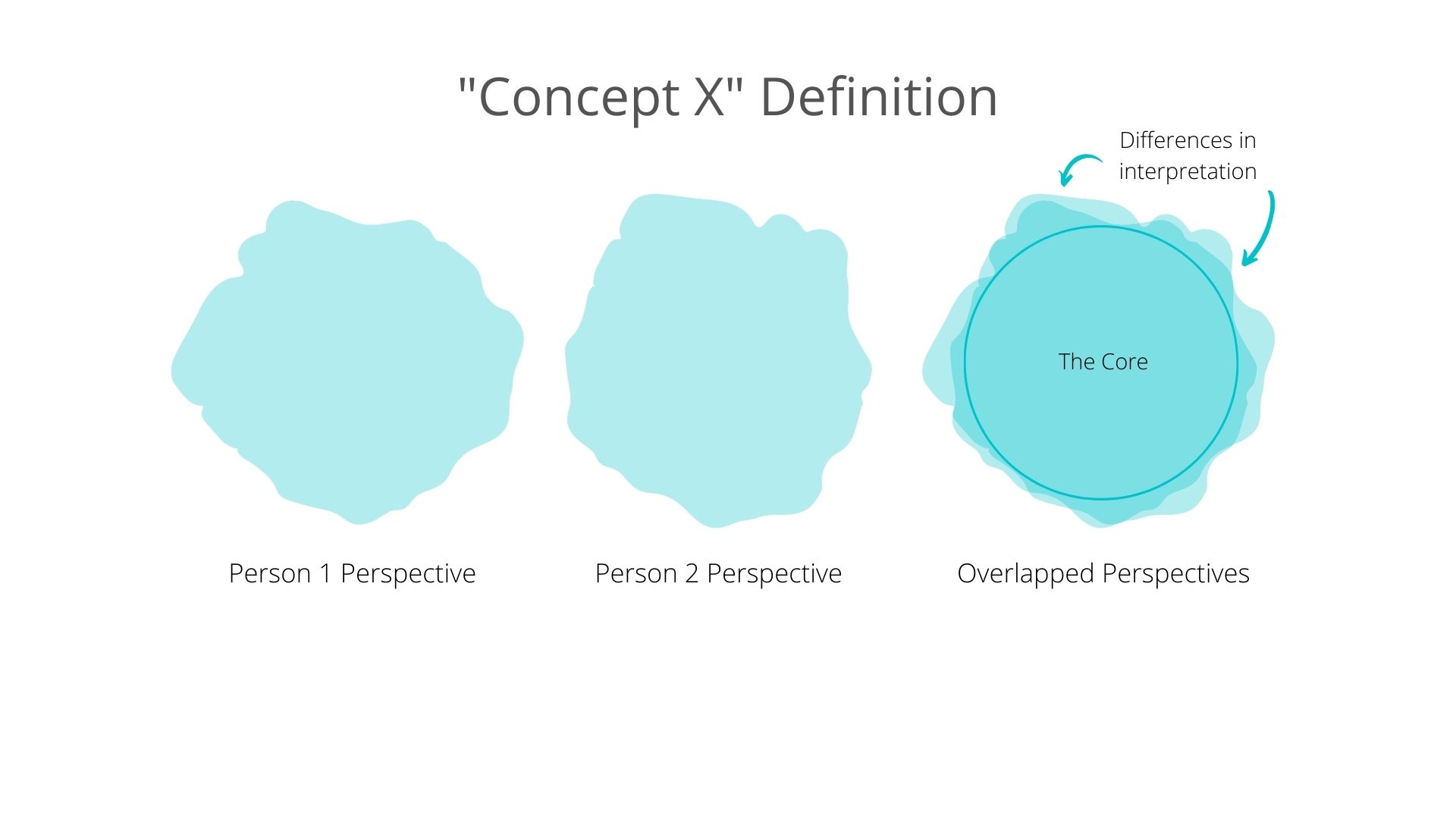 When talking about distinct concepts, we all possess some knowledge about those. If I ask you to describe homeschooling, veganism, or capitalism, you can easily define those terms. Any concept has a core that is well established and agreed upon. There might be some minor differences subject to interpretation in explaining its boundaries, though. Still, most concept definitions are objective (as long as that concept was around for some time).

However, the moment a related concept is added for comparison, everything becomes subjective, and there is an infinite amount of interpretations and comparisons between the two.

Whenever you have to take a stance in-between two concepts, there is literally an endless amount of opinions and nuance that can affect and make you move along the segment.

My Yellow Is Better Than Your Blue

Life is complex, and pretty much any idea/concept has many aspects. Yet, in any argument, we tend to reduce a concept’s multidimensionality to one or two dimensions and focus our reasoning on those.

Let’s take the classical “are you a goal or process oriented person?” interview question.

Once we reduce the multifaceted concept or work to a binary choice, all we are left is to choose between the two, disregarding everything else. It means throwing away all the nuance and context just to be able to pick a side.

Quite often, the main problem is the question itself. It tends to divide people into two categories, increasing the gap between those concepts. And by focusing on either of those, you miss out on the benefits of the other:

But the reality is different, though, and rarely it resides at an extreme.

In real life, having both a process and a goal is essential as it allows you to do your work faster and with less effort.

Therefore, frequently, we are asking the wrong questions. For instance, instead of:

Are you a process- or a goal-oriented person?

A better question to ask is:

What is the importance of processes and goals in your workflow?

Now the question does not create a gap between the two concepts but brings them together. Now you have to find that balance of process and goal orientation that brings the best results. You have to intertwine them, seek connection points, and discuss how they complement each other rather than how one is better.

Do not divide, unite! (couldn’t resist putting it here :), although that does sound like a political slogan).

Therefore, the outcome from taking a stance at an extreme is rarely (if ever) going to be better than considering both sides and taking what’s best from each.

That does not mean the best outcome is always in the middle, though. The middle point represents the equal importance of both goals and processes, while moving to one of the ends means that that end’s concept is more important and the other’s end value is smaller. Moving all the way to an end means that the other end has no value.

Therefore, the crucial point here is that both sides have some benefits over the other, and when we do not push one back, we can leverage the strengths of both approaches rather than limit ourselves to a single side. It doesn’t have to be in the middle, but it has to be away from an extreme.

That is also the first step toward finding a compromise. Once you acknowledge that the other side has some strong points you can benefit from, it is easier to let go of some of your own misconceptions and see things from another perspective.

Besides, nothing in the real world is truly disconnected, yet we frequently tend to disjoint stuff daily:

From 1D To 2D And Beyond

As mentioned previously, having a segment that represents an infinity of aspects between two opposing criteria is limiting, as it ignores a lot of perspectives and nuance.

Discussing process versus goals happens in one dimension. To make the talk more insightful, we can add more dimensions to it. 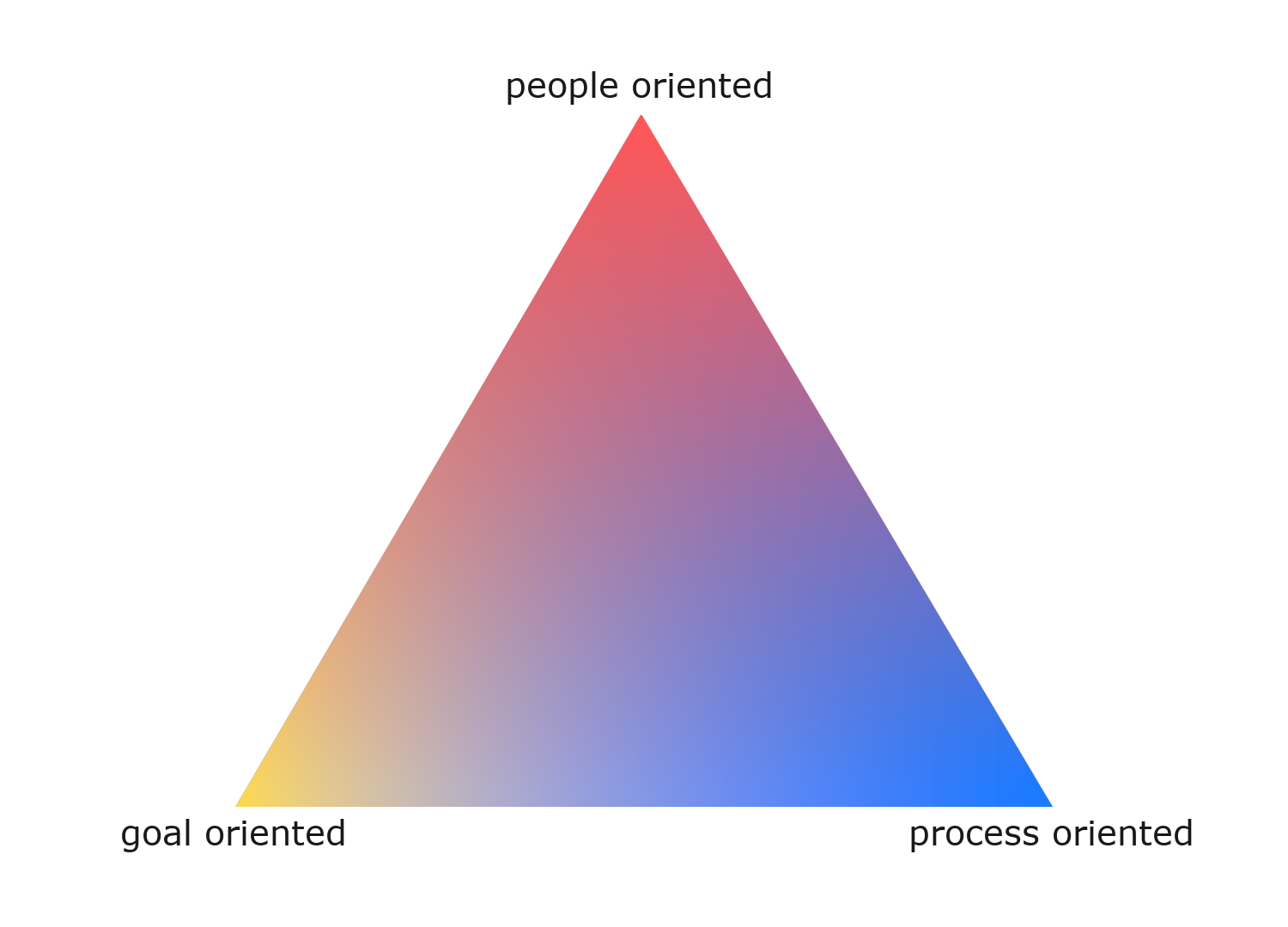 Now the base is still process versus people, and your opinion on this relationship stays the same. However, with the new aspect addition, you can move perpendicularly along another dimension.

Now, you have a triangle, and a perspective on people vs. process vs. goal orientation importance can easily be represented as a dot somewhere inside this triangle. 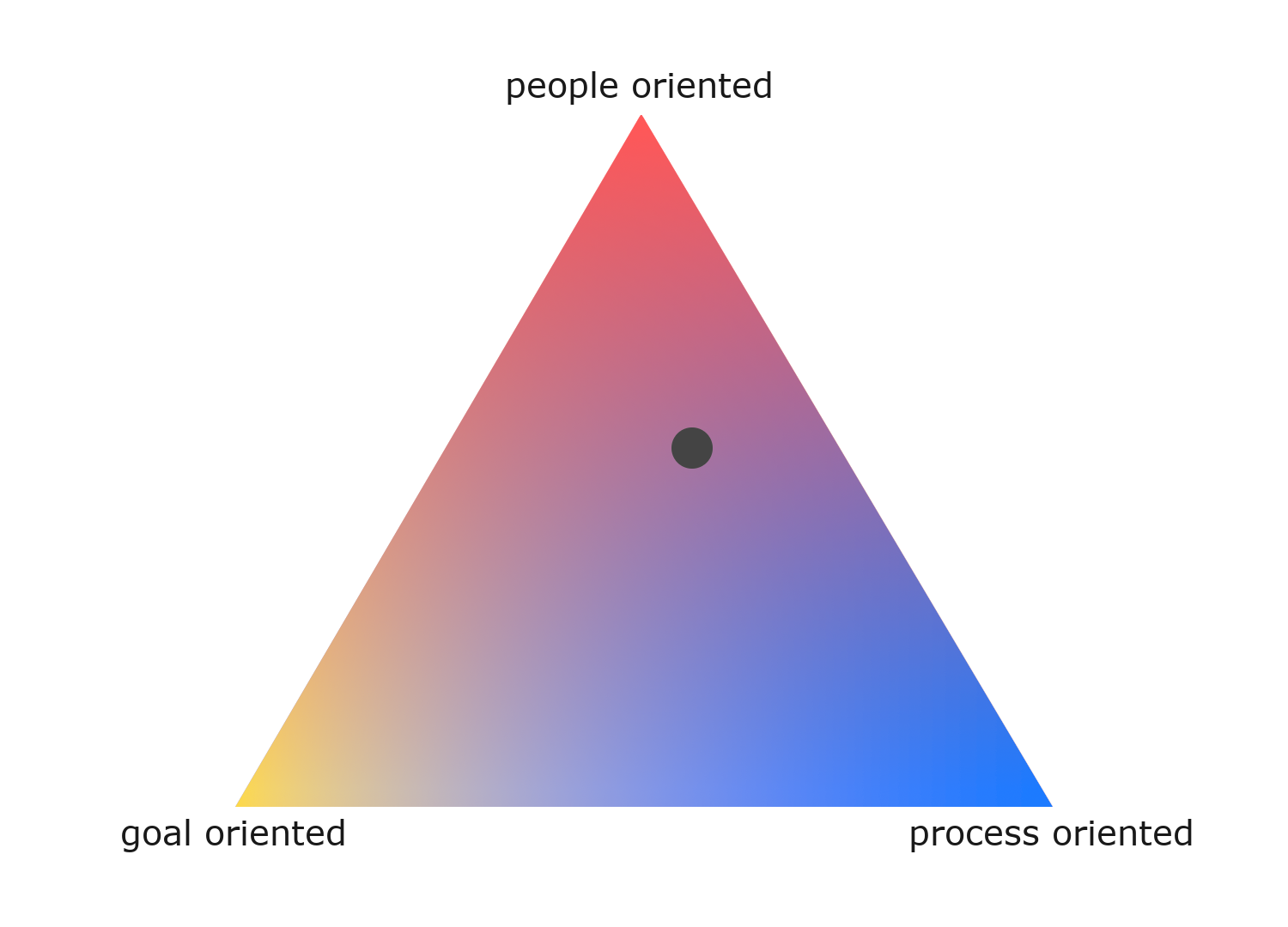 Such visuals can also help compare viewpoints of different people.

Adhering to the same logic, we can add more dimensions, transforming the triangle into a tetrahedron, etc.

Discussing things and finding compromise is hard. Even deciding something for ourselves is sometimes so complicated that we are struggling to make a choice. For most of our lives, we are in a constant search mode, trying to find and keep an equilibrium in areas of our lives that do not have a clear distinction between where one thing ends and the other one starts.

The most challenging thing is not to select a side but to find the optimal balance, as most things in life exist in a symbiosis rather than totally disjointed concepts. But if you find that balance, you will be much better off than anyone who chooses an extreme.